Superheated steam …..what is this?

The concept of boiling water and harnessing the energy goes back to the 1st Century when Hiro built the first steam turbine engine.  The principle is that the volume of water when boiled as it turns from liquid to gas expands at a ratio of 1600 to 1 aprox. dependent on atmospheric pressure.  However as the gas  or steam rises from the liquid state it takes with it water droplets, that not yet have converted to gas.  This is saturated steam.  Saturated steam albeit useful in heating and sterilization has problems in both piston and turbine engines.  The liquid particles act like bullets breaking turbine vanes.  The water droplets are also abrasive.  In a steam piston temperature is very critical as when steam looses temperature it returns to a liquid state thus energy is wasted and not available to push the piston.

The process of superheating  in the 1364 and other locomotive engines is done by gathering the steam from the manifold and routing it back through the fire tubes. The same heated gasses that boiled the water in the first place now heats the saturated steam turning the unboiled water droplets into steam (see illustration right)  Interesting it take 1 BTU to raise one pound of water one degree.  In heating steam it takes ½ BTU to heat the same mass (1 lb.) of steam one degree.  The same heat used to boil the water now raises the temperature of the steam converting the remaining water droplets to steam. 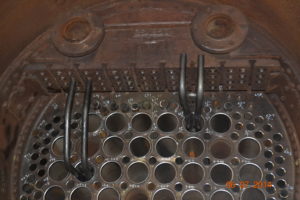 Above:  Andy Breeding is fabricating new superheater tubes and is testing the fit.  When the tubes are completed they will be attached to the above manifold. 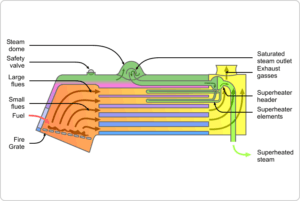 Above illustration courtesy of Wikipedia.