The Spokane Club is one of five round end observation cars that was built specifically for the Northern Pacific Railroad and its famed “North Coast Limited” passenger train in 1946. When built, it had the ultimate luxuries available to train travelers. Those that rode it describe the joy of watching the passing scenery and track disappearing behind the train. The luxury included a porter on duty and available for drinks or snacks at the push of the button alongside one’s seat. The car has private bedrooms with Pullman berths that convert from daytime couches to nighttime beds. Adjacent rooms had a folding wall so that families could enjoy a larger private compartment if desired. At night one simply put his shoes in a pass through storage bin to awaken with shined shoes in the morning. After getting dressed, pushing a button in the room called the porter to make up the bedroom into it day time configuration while one ate on silver service in the trains dining car. Then back to the observation car for a carefree, relaxing day.

The Spokane Club began its service in the heyday of railroad travel, but by the 1950’s, the postwar boom with private automobiles and air travel were cutting into rail travel. Other railroads had already upgraded their equipment and instituted more rapid trains. In an effort to compete, the Northern Pacific went all out to upgrade. Raymond Loewy, the famous industrial designer, was hired to improve the appearance. He redesigned the interiors on the observation cars including the Spokane Club and provided a new color scheme. With the new Vista-Domes the train once again became profitable, but over the following few years ridership declined again and the round end cars were sold into private ownership in 1966. 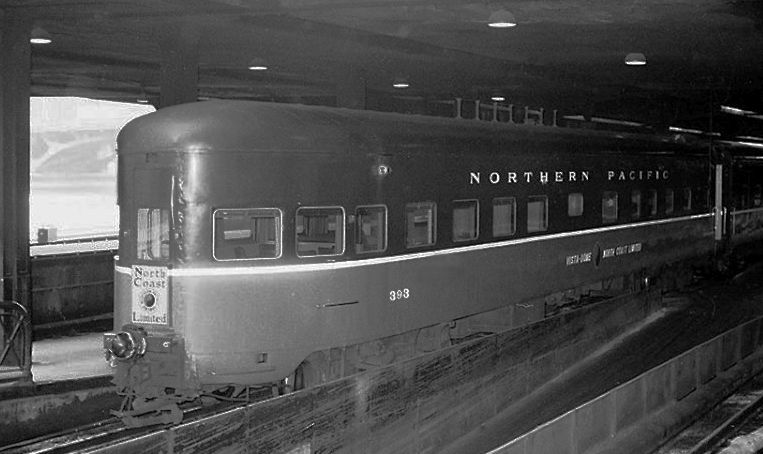 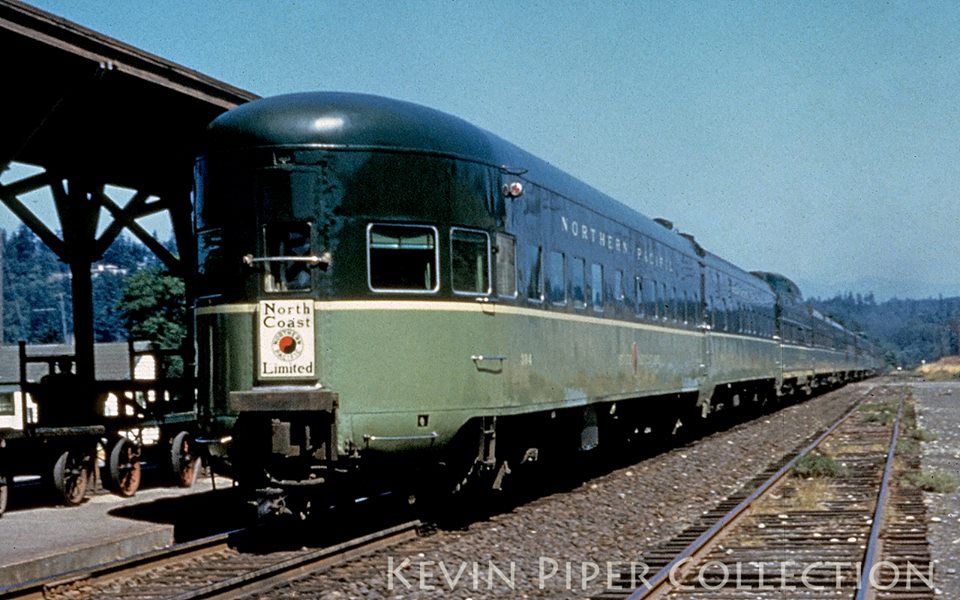 NP 394 Montana Club painted in the Lowey paint scheme.  We will in the future time repaint the Spokane Club accordingly. 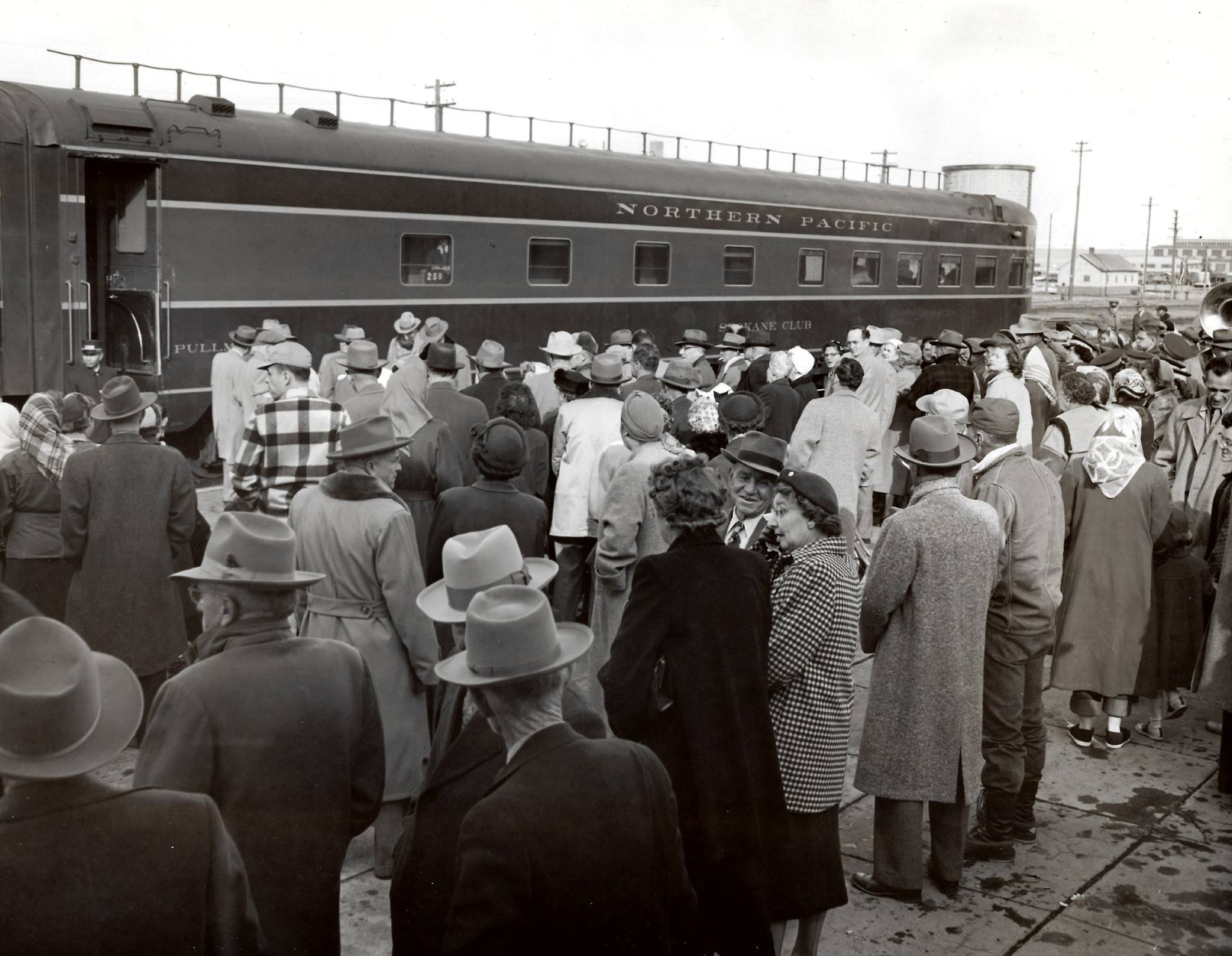 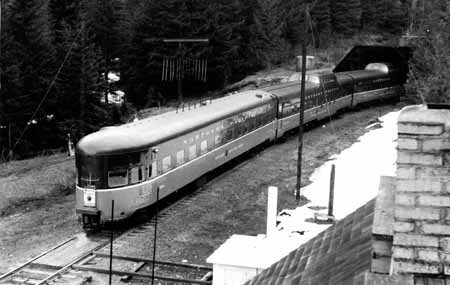 The Spokane Club had one private owner before being purchased about 1970 by the Bangor and Aroostook Railroad (BAR) of Maine. For the following 25 years the car served management as a private business car and it was frequently donated to local civic groups for their fundraisers. With changes in the economy, rail business decreased and ownership of BAR changed several times. New owners had little interest in the old railroad car and it was parked at their railroad shop in Derby, Maine, in 1995. After several ownership changes, the Montreal, Maine & Atlantic was the owner when one of their oil trains was involved in a disastrous fire that killed 47 people in Lac-Megantic, Quebec. This resulted in a bankruptcy after which the new owners began to dispose of much of the equipment. In 2015 the car was sold to a private individual for $1 on grounds he move it off the property by May 31, 2017.
For the Northern Pacific Railway Museum in Toppenish, there had always been a desire to acquire passenger cars to help relate the story of the railroad and its importance to the development of the Northwest. Most of the old Northern Pacific railcars were already in museums or tourist railroads and only a few come up for sale. When a Northern Pacific coach and dining car off the North Coast Limited came available, they were obtained for use in any passenger operations that might be accomplished. Even so the train could never appear correct without a proper tail car. Museum members had been aware of two of these cars potentially available but at prices far above the means of a small museum. Early in 2017, the price was greatly reduced on one of these, NP 391 (previously the Arlington Club). Two museum members traveled to St. Paul, MN, to see it, but the car was incomplete and could not move on the rail. As potential transport to Toppenish was sought, word came out that the Spokane Club might be available. The new owner had been unable to raise the funds to move it by the deadline in his purchase contract. There was an opening for the museum to move on it.

The car had been inspected by a third party and pictures were sent to the museum. With proper prep work it could move to Washington behind a freight train. The museum discussed this with Jon Clark, who is a certified Amtrak inspector and a mechanic. He agreed to make a trip to Maine to help prepare the car for transport. A purchase agreement was made, and on May 3, 2017 Dennis Lee and Doug Shearer began the 2800 mile drive to Maine. After averaging 800 miles a day for 3 and a half days, work on the car began on May 7 and by May 13, the anticipated preparation work was completed. Rebuilt brake valves were installed, all brake cylinders were rebuilt and lubed, required stenciling was applied, steps were welded into position, and preparation for a flashing red tail light was made. Unfortunately, one major problem was found. Two axles were found to have cracked brake discs and thus were condemned. Fortunately, after John Clark searched his contacts, two good wheelsets were found. With costs of the wheelsets, transport to Derby and installation, suddenly $13,000 was added to the cost. The Central Maine and Quebec Railway was kind enough to extend the deadline for wheel replacement to take place and finally on August 3, the car departed. Because of the complications related to passenger car movement on freight trains, the car was delayed numerous times. Ed Berntsen of Railmove NW supervised the movement with daily phone calls to try to shepherd the car along. Finally the car arrived in Toppenish on October 11, nearly 5 months, 3,450 rail miles, and traversing 4 railroads and 6 inspections after initial prep work was begun.
Museum members began cleaning and a few days later the lighting system was rewired to run on shore power (ie could be plugged in to a 240 volt plugin). Curtains were taken down and washed. Now real restoration needs to begin. Before painting back into the Loewy scheme, various leaks and two cracked windows will have to be repaired. Several rusted spots need to be patched. Interior paint needs to be redone. Rugs need to be replaced. Eventually the furniture needs to be restored with original appearing fabric. All this will take manpower and money. More donations will be needed as the wheel replacement took the money that had been budgeted. The goal is still to get much of this done in the next couple of years. Even as is, a visit to the car can help one to envision the days of luxury train travel. The museum opens its regular season May 1. The car is not routinely open, but most museum volunteers are happy to tour it with visitors, especially on Saturdays when more volunteers are available. 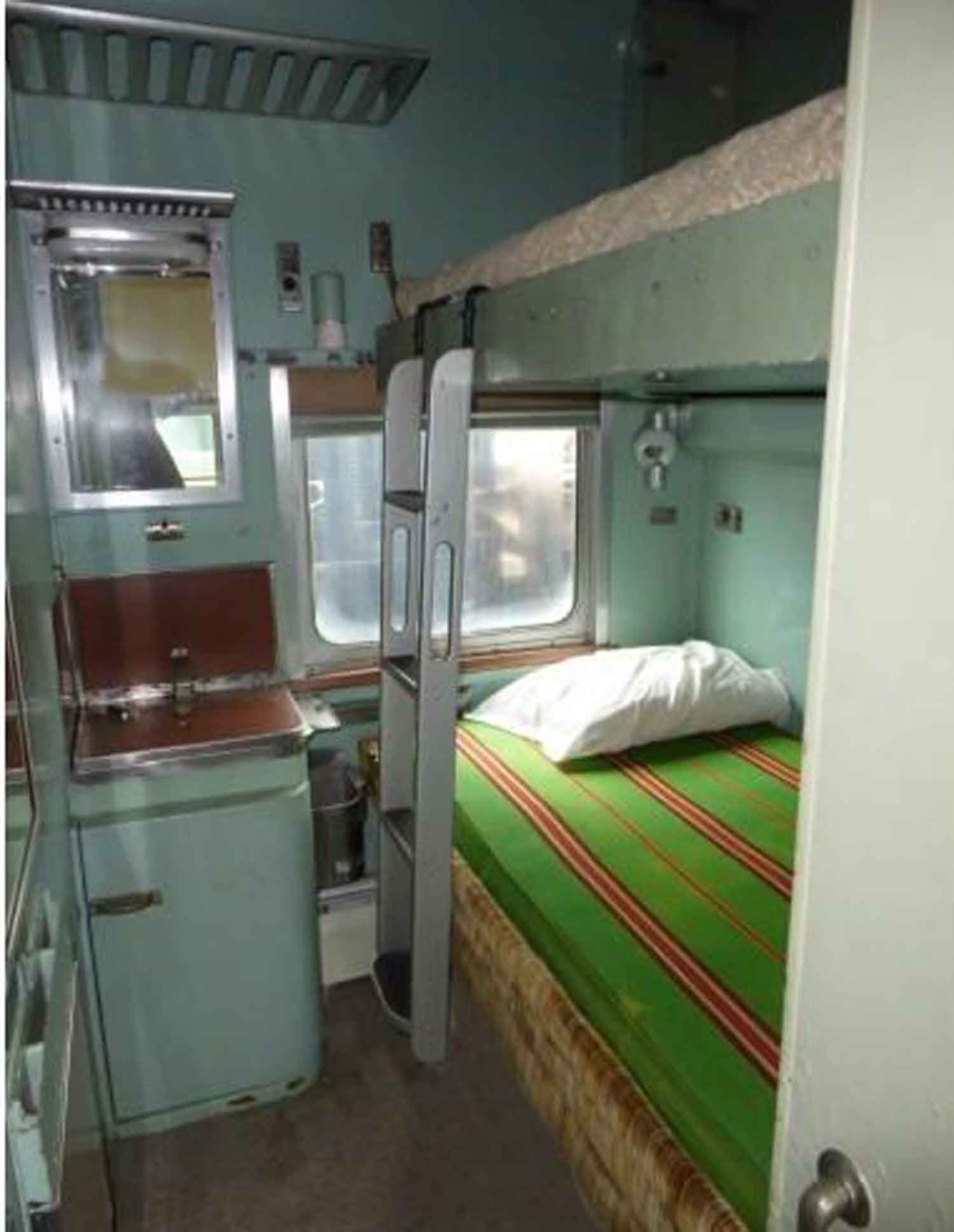 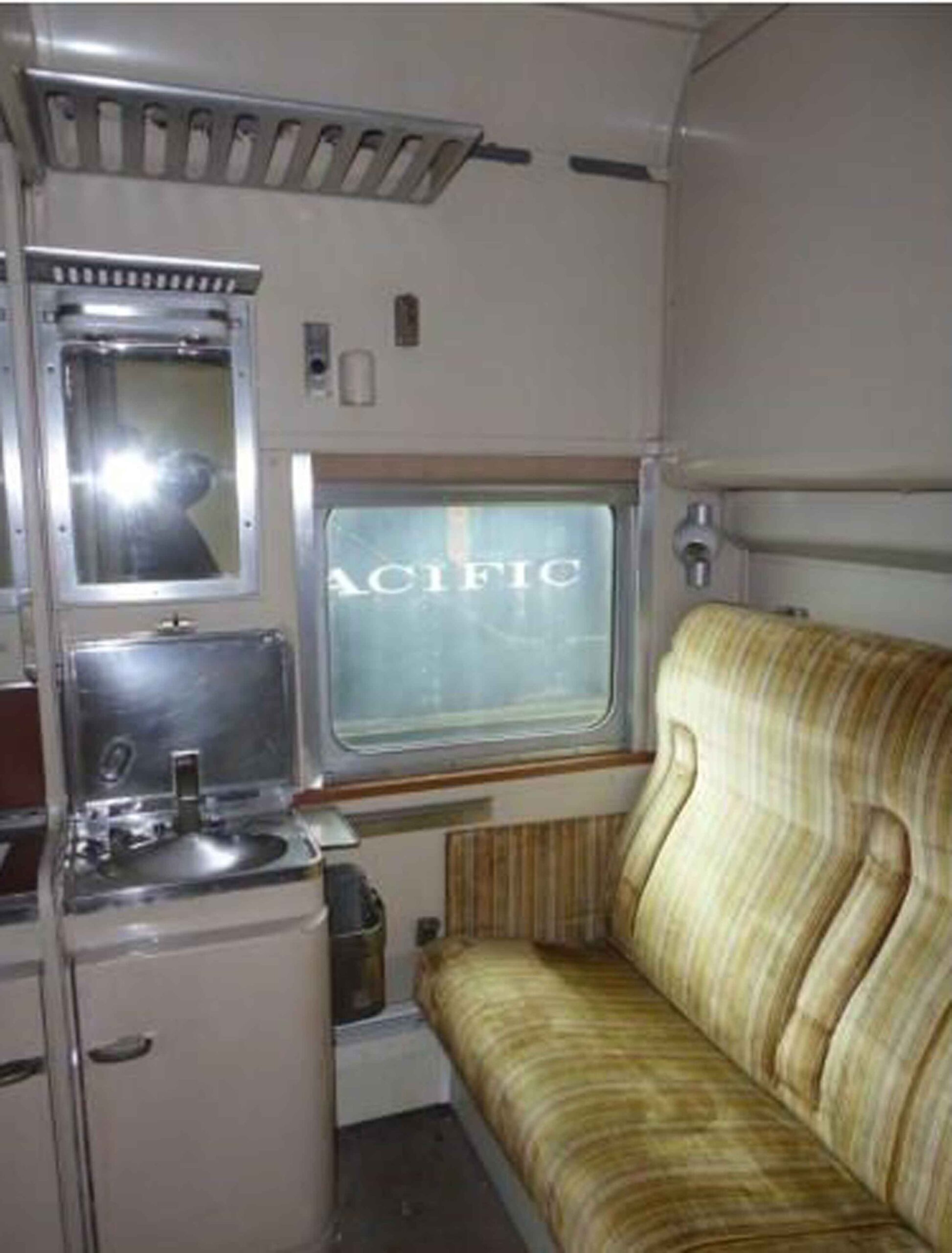 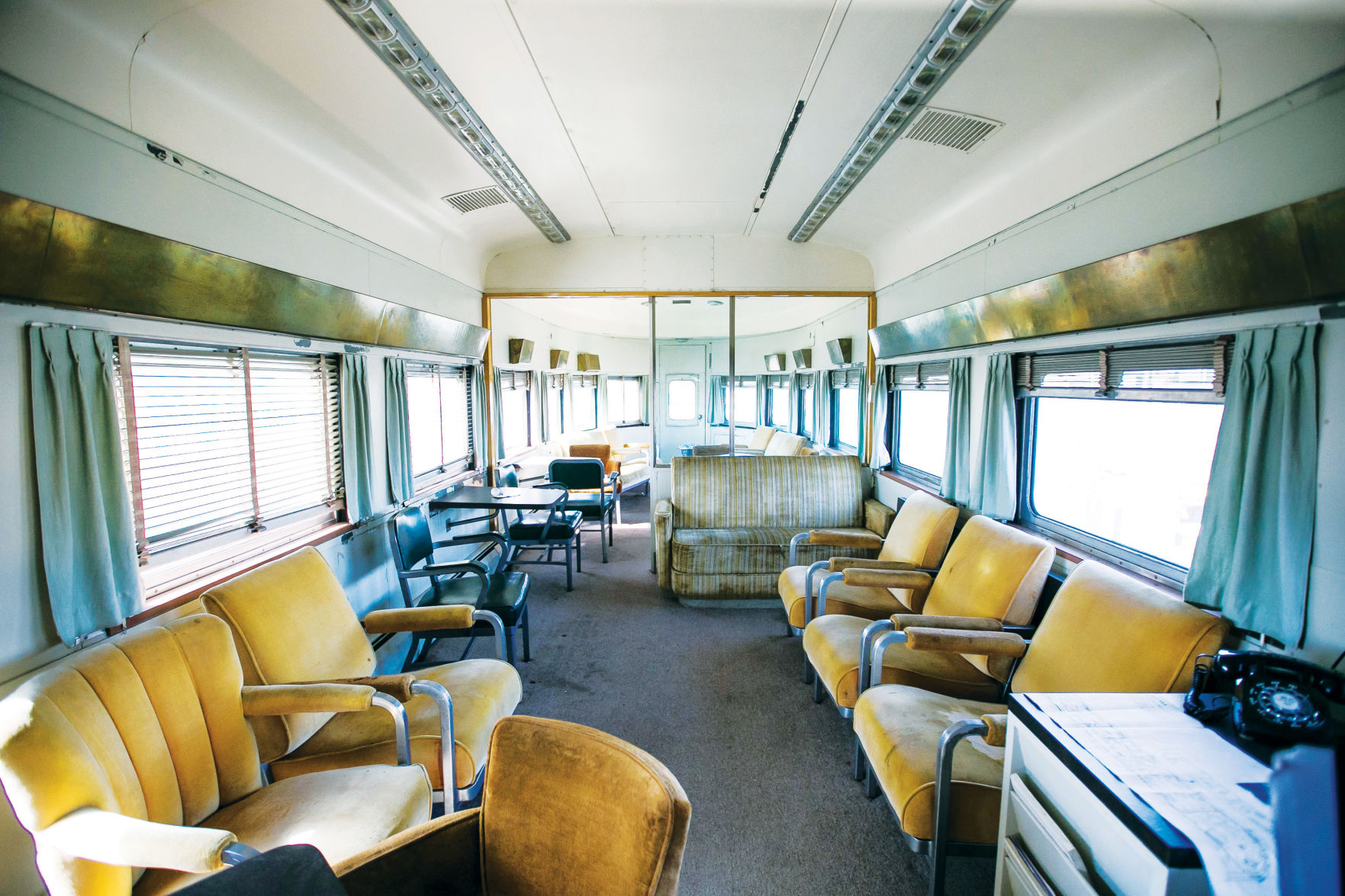 The lounge with the sloping back window for full 180 degree views. 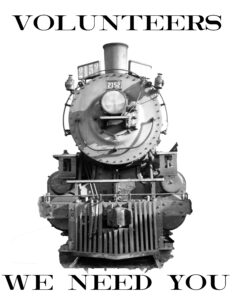 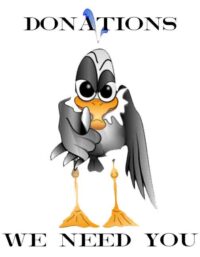