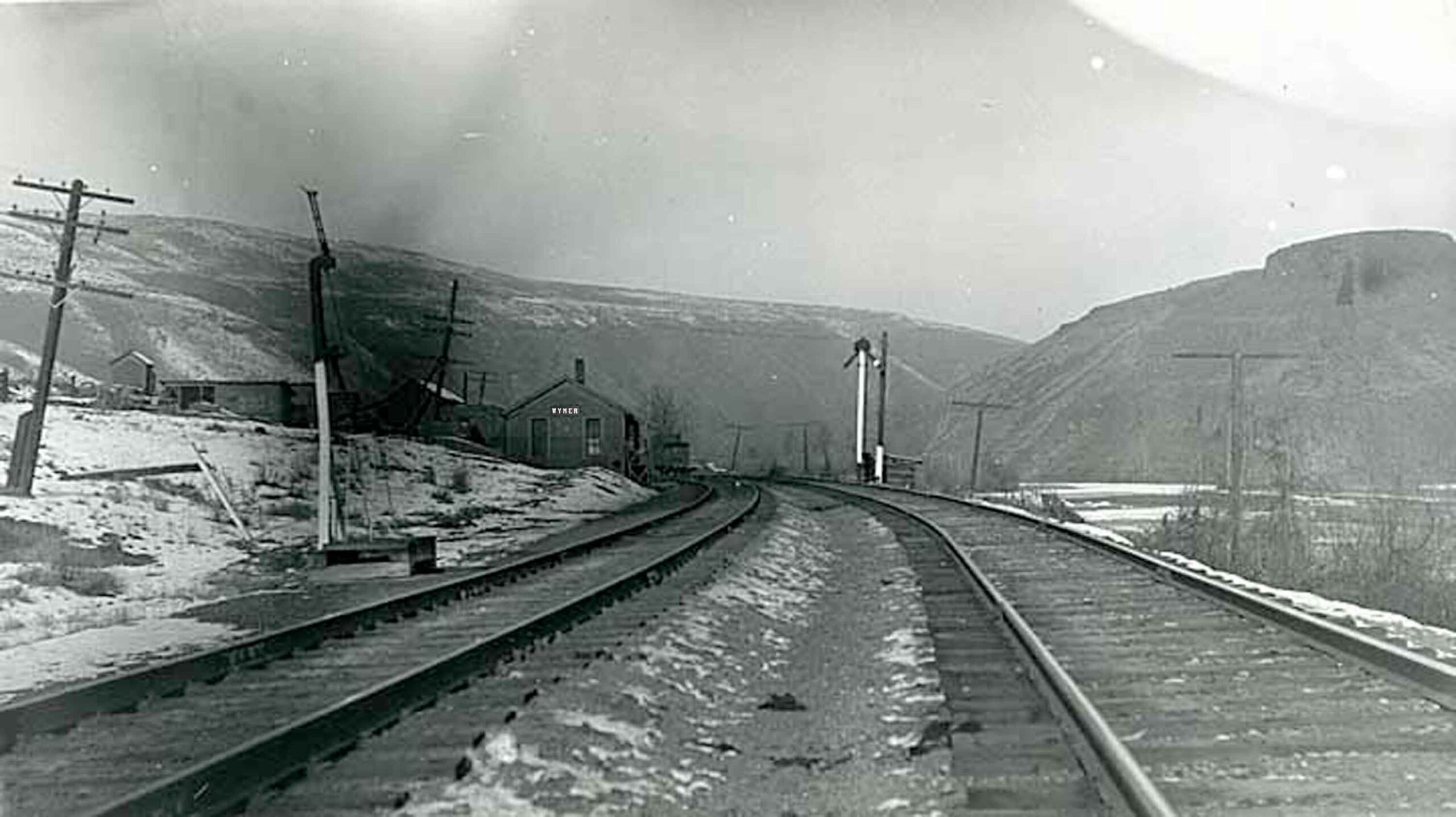 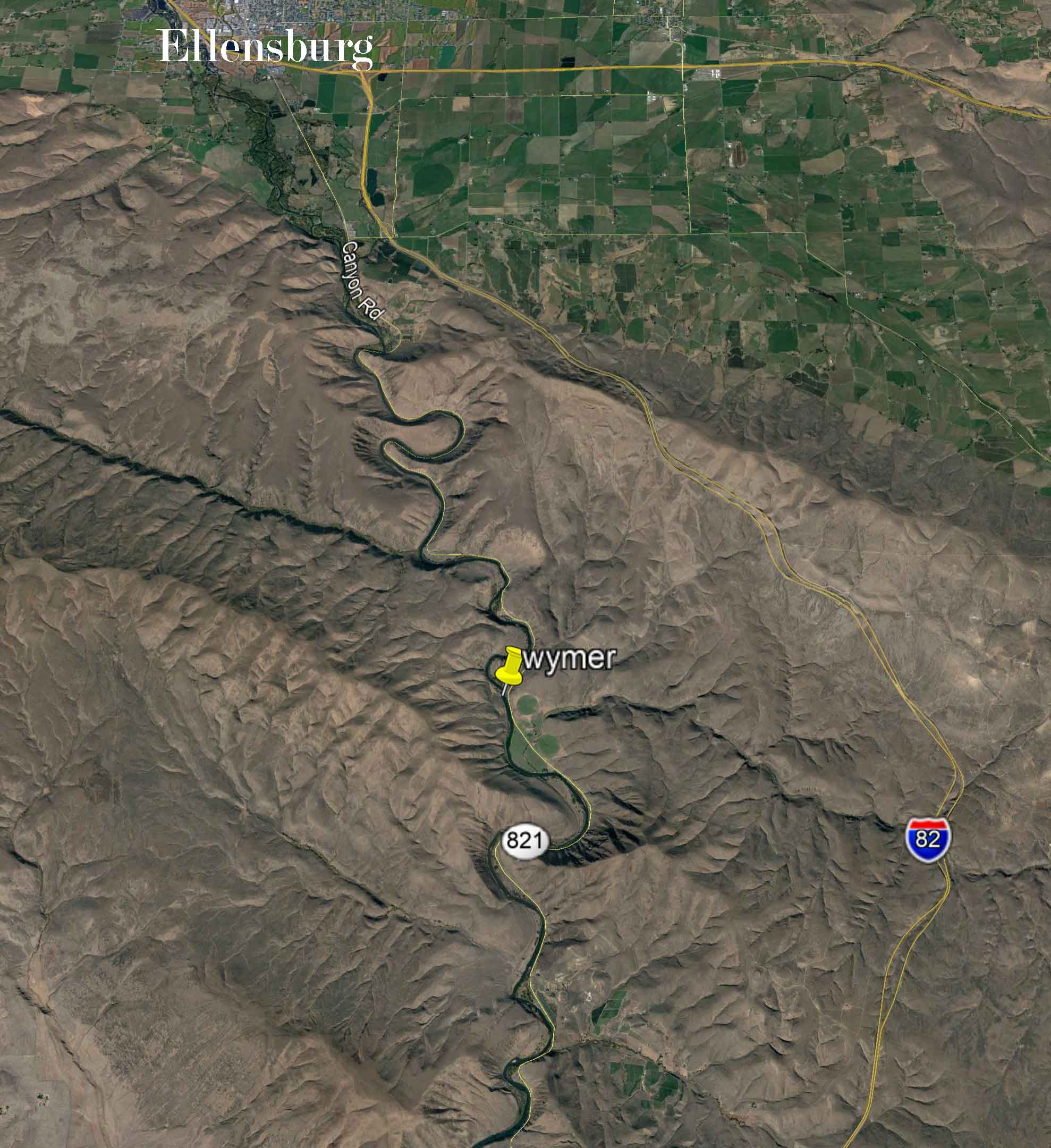 In the Yakima Canyon there were 6 stations originally built for the purpose of providing sidings for oncoming trains. By the 1930s with automated switches the need for these maned stations decreased and consequently abandoned. Wymer closed Dec. 25 1957. 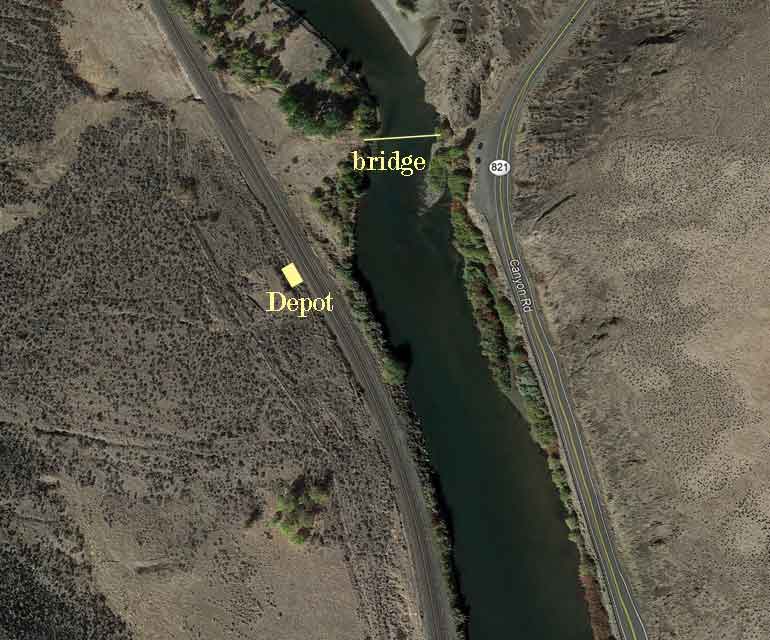 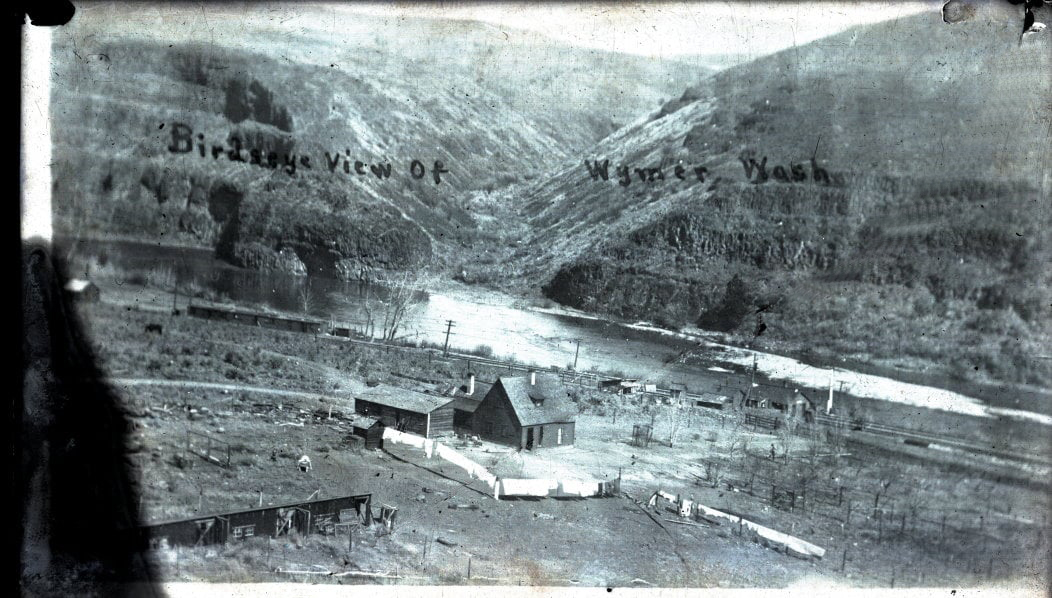 Looking NE up the canyon where the Yakima Canyon road would follow. The road would be built in 1923. Troyce feels this picture may be earlier like before 1909 as there are 3 people in the photo, man woman and little child. Could this be Newton and Eva Slack with their daughter Dorothea Mae? Photographer unknown, Troyce Brooks Collection 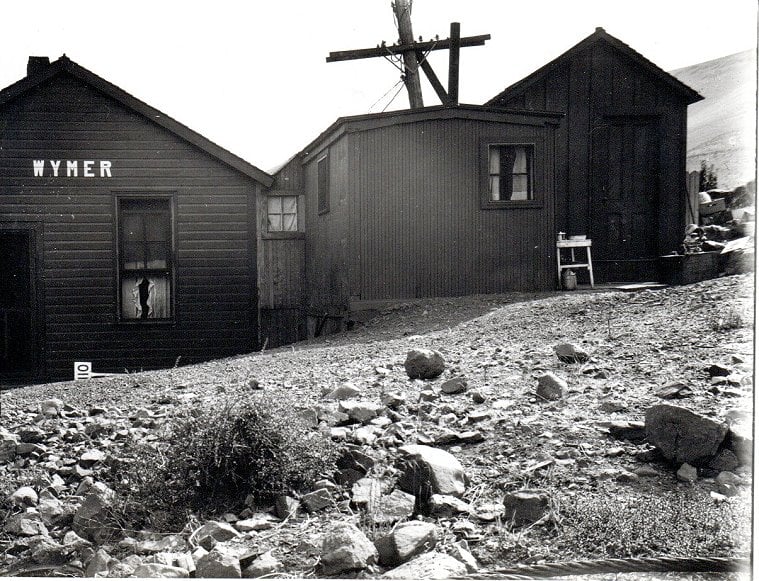 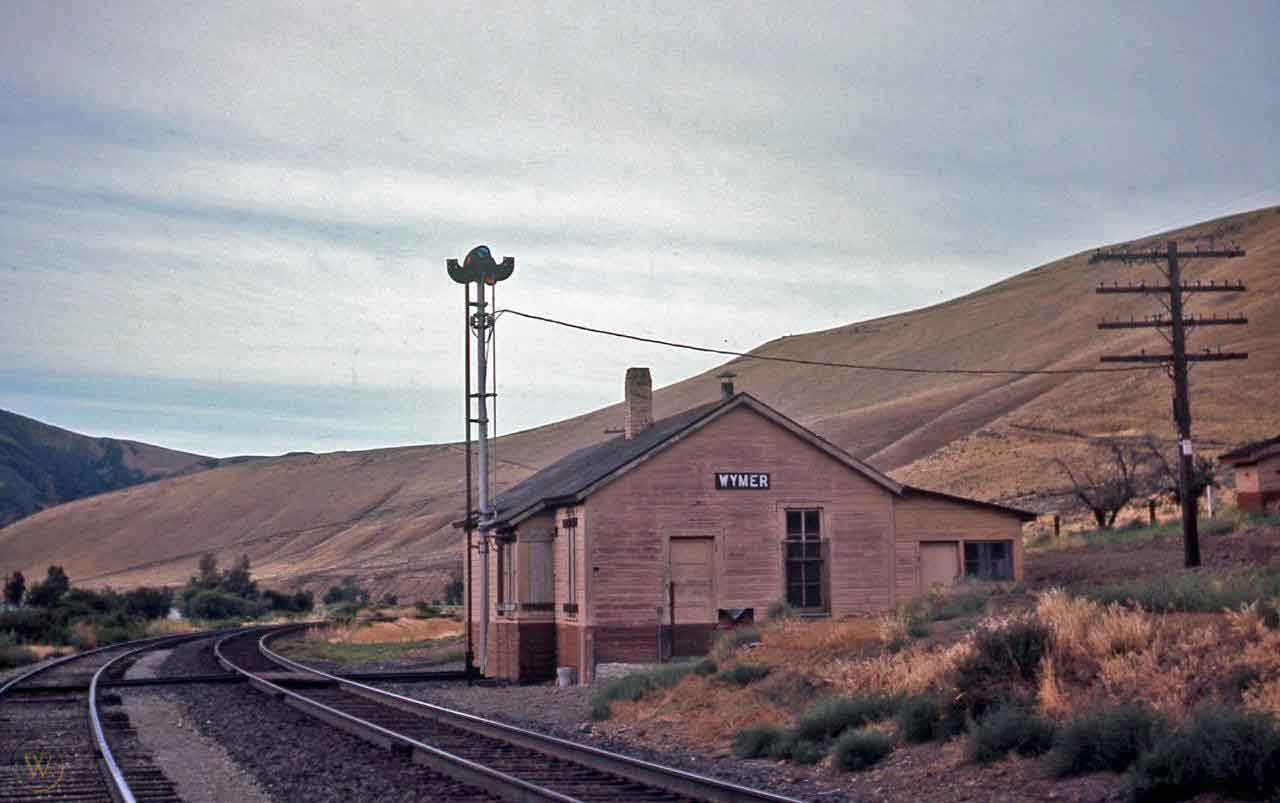 So according to the Revisit WA site the depot of Wymer was renamed from Canyon to Wymer (after Seymour Wymer) in 1912. So who was Mr Wymer. Mr Wymer was born in Ontario Canada in Nov 1872, according to his NP file. His headstone though says 1871. Not certain when he came to the US but from 1902 to 1907 he was employed as an engineer with the Hoyt Laundry Co. in Detroit Mich. 1907 to 1908 he worked for the Spokane Seed Co. Then in April 1908 Mr Wymer hired out as a pumper at Connell, WA. In Sept 1908 he was transferred to Mesa, WA. He was transferred again in Dec 1910 this time to Wymer, WA. This transfer occured due to the previous pumper at Wymer being promoted to Coal Dock Foreman. He appears to have remained at Wymer until 1928. His supervisor during this time was C.R. West, Water Services Foreman, Pasco. Seymour was transferred one more time. This time he went to Pasco as a Section Laborer with Sect #18 Pasco. The reason for this transfer was “Position of pumper taken off at Wymer”. Mr Wymer passed away on Dec 14, 1938 following a paralytic stroke. At this time Seymour was Janitor at the Pasco passenger depot. Seymour Wymer is buried at City View Cemetery Pasco, along side his wife Sarah Helen Kramer Wymer. As to why Canyon was renamed for Mr. Wymer I do not know, perhaps it’s as simple as he was there. Maybe someone knows or I’ll dig that up one day. Troyce Brooks 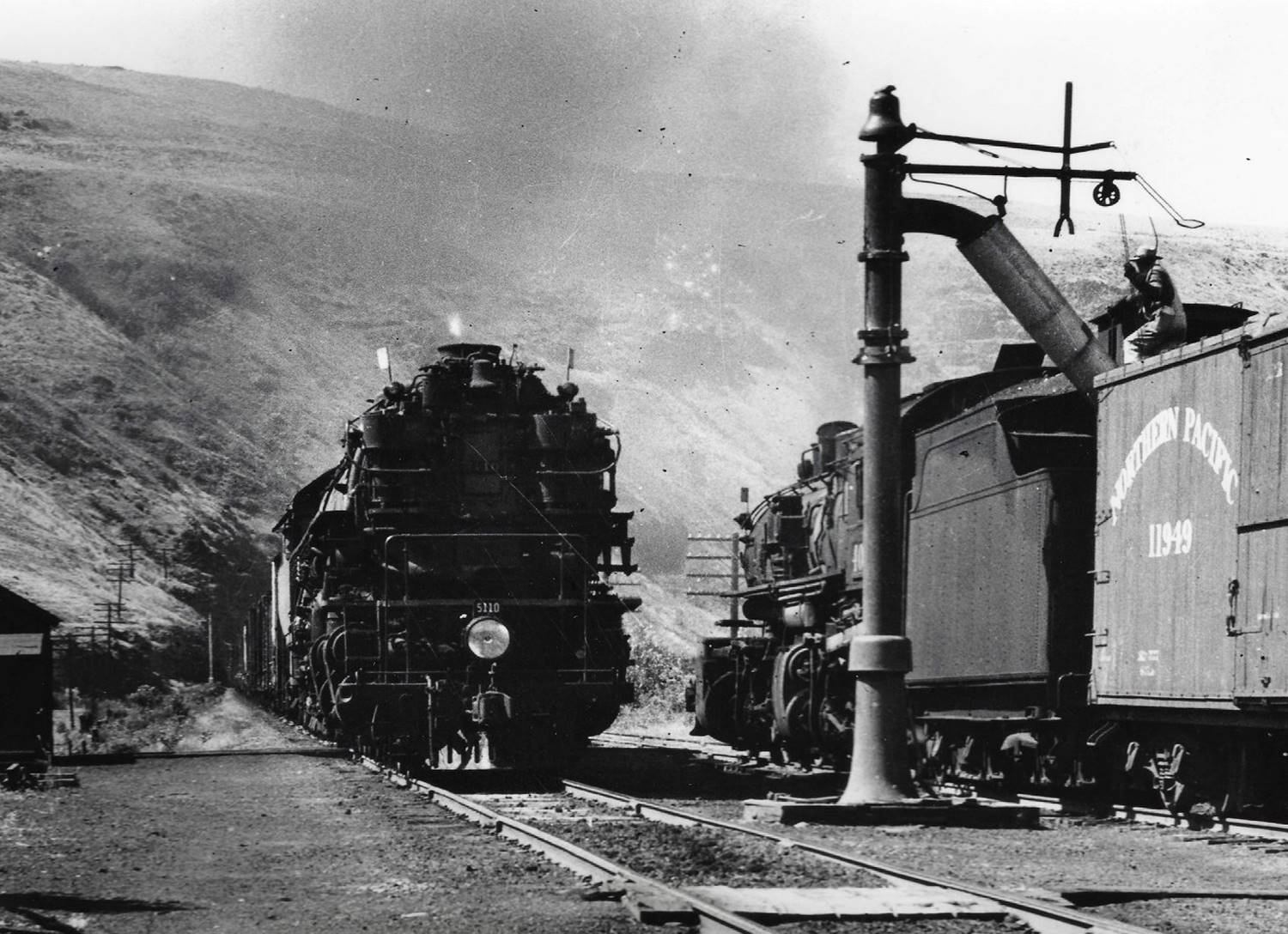 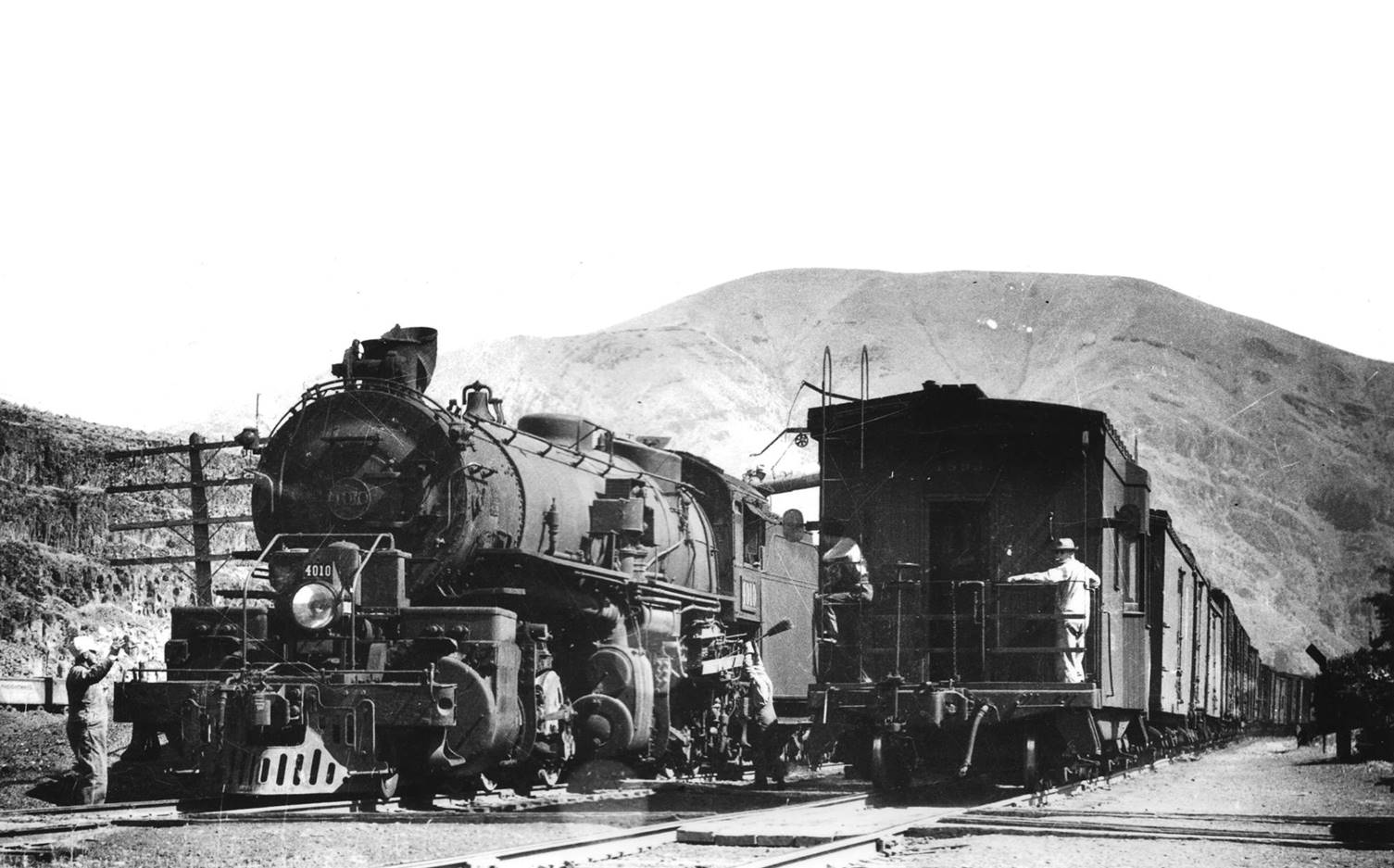 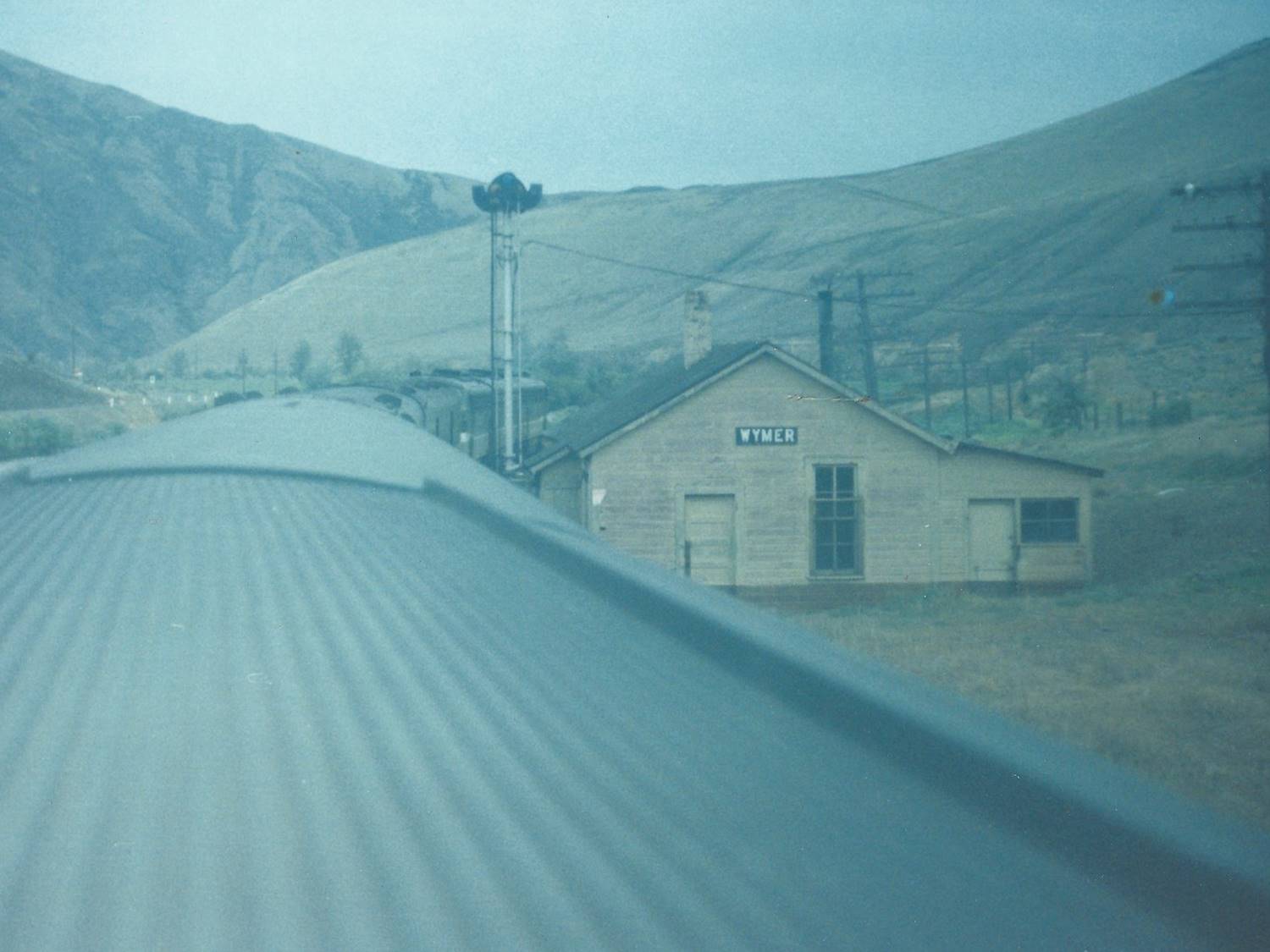 Train action at Wymer. The Z class steamers stop to pick up water. Picture on right shows the abandoned Wymer. 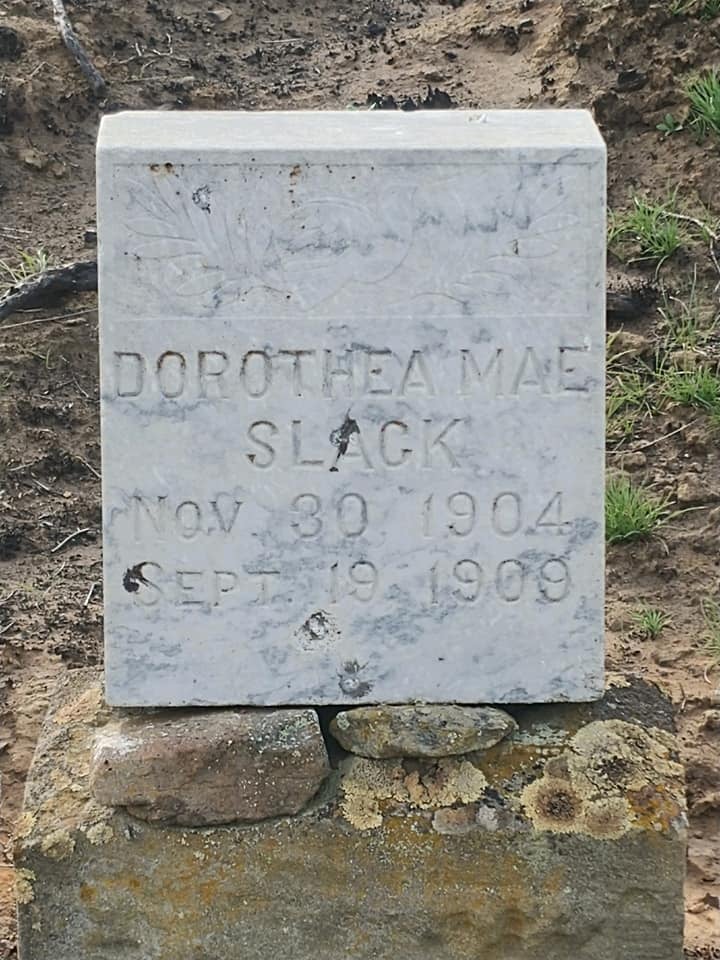 Dorothea was born in Indiana in 1904 to Newton and Eva (Griffin) Slack. She died in 1909 just shy of her 5th birthday. They appear to have moved to Washington sometime in 1908 or early 1909. In early 1909 Dorothea’s Grandfather Frank Griffin hired out with the NP as operator at Canyon. He replaced W.W. Wolf who moved on to Roza, WA as operator. Presumably Dorothea and her parents were living with Frank at Canyon at the time of her death and that is why she is buried there, but I don’t don’t know for certain.  (Eds. note Canyon was changed to Wymer in 1912) 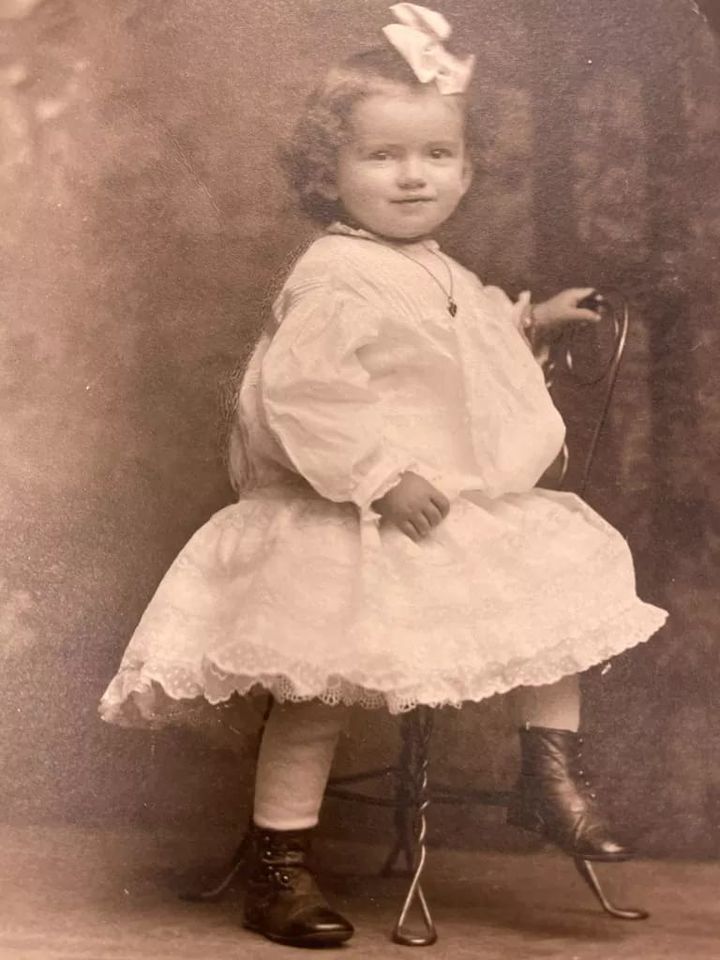 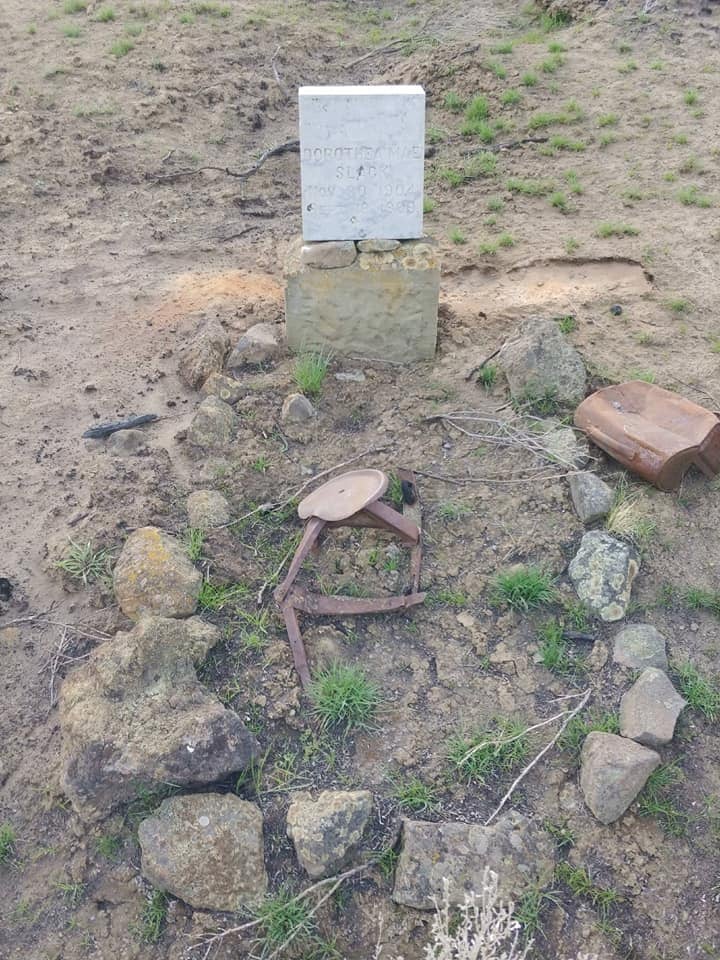 Death records show that she died in Yakima, but that could be because it was the nearest town or did die there from illness or injury. Cause of death is not known. Her parents are listed as living in Yakima, WA in 1910 and both are buried in Terrace Heights. Newton did hire out with the NP but not until 1915 and then appears to have been there only a short time. He was time keeper for gang #2 at Buena, WA. Frank went on to be operator at Roza as well, and later as operator at Parker,WA. Troyce Brooks 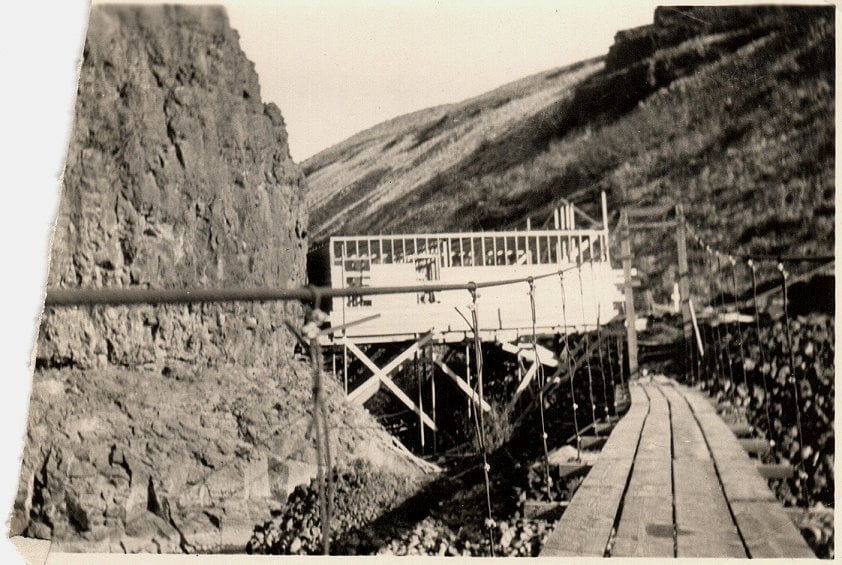 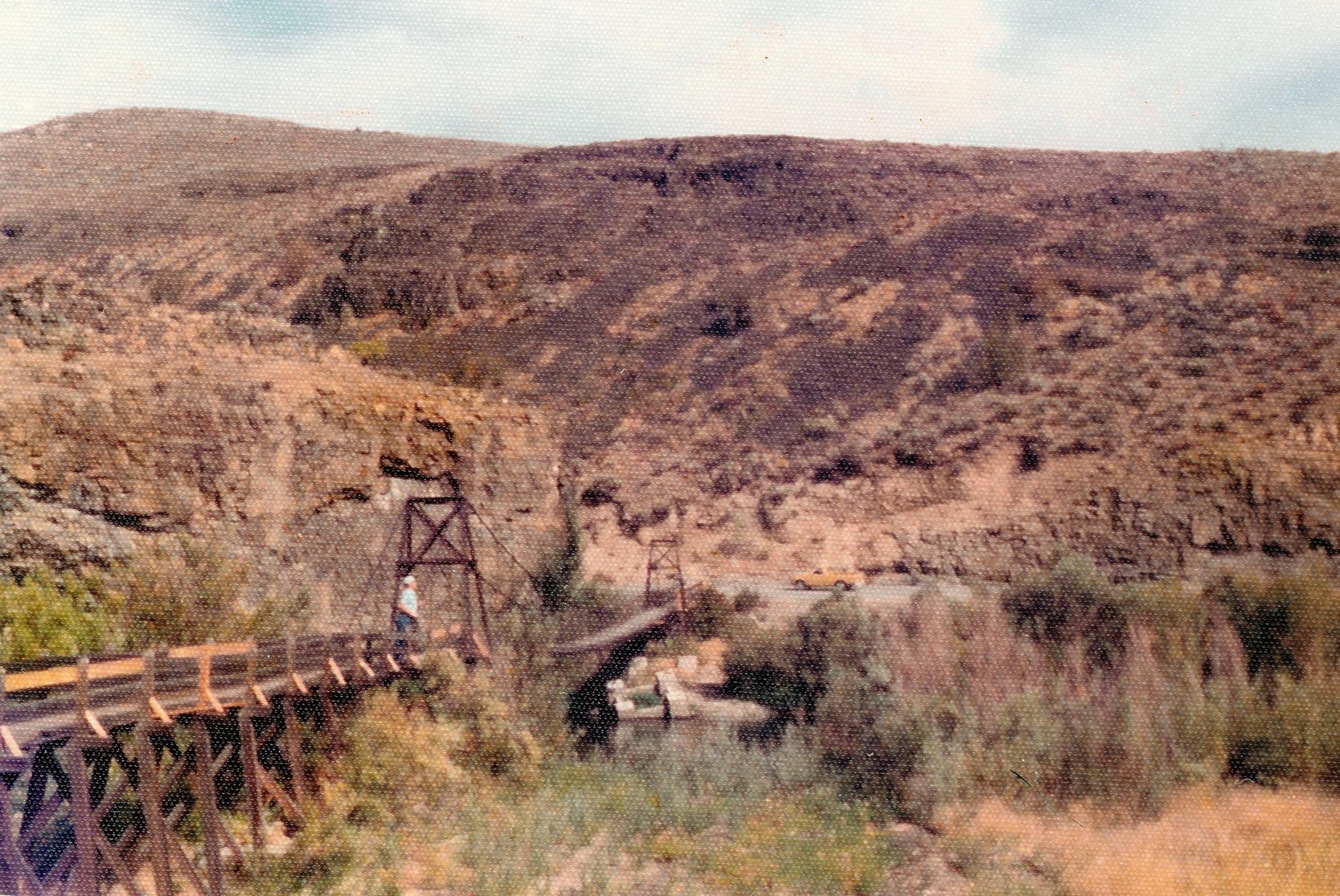 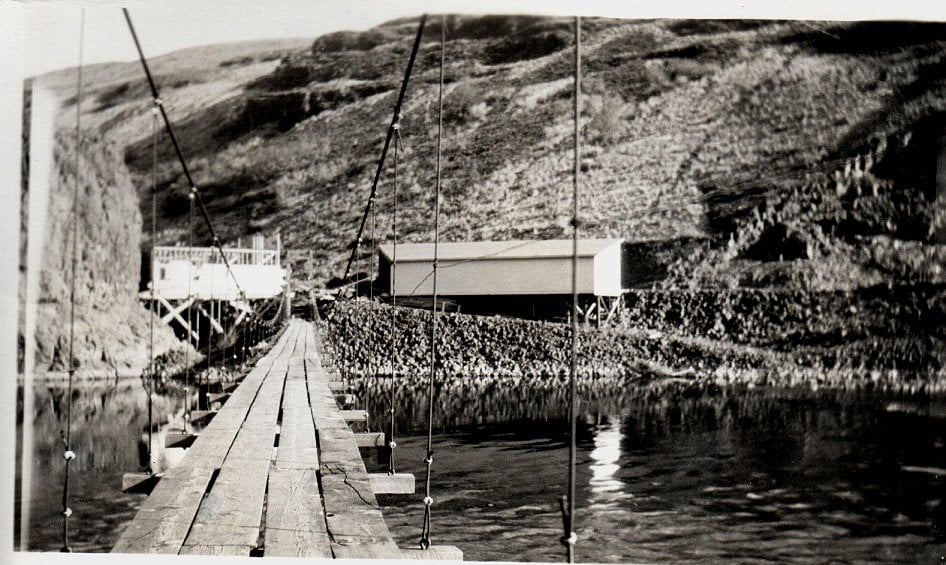 The Ellensburg Canyon Road was built in 1924. In about the 70s the locals started calling it the Yakima Canyon and the canyon west of Ellensburg retained the the former name. In the 2 black and white photos Troyce is unsure if the road in the picture was indeed the Canyon Highway.

(Troyce): “I had my dad look at this photo. He remembers the building on the right but not the one on the left that looks like it’s still under construction. At the time in the 50s when he and his sister used to go visit my Aunt and her husband, he says this was a garage. As far as he knows it was always a garage for the cars owned by those who lived and worked at Wymer. I don’t remember it but he says it stood at least into the 70s.”

Right: Looking south Canyon Depot before 1912. The depot is downstream just around the bend from the location the picture was taken. Photo from Washington State Historical Society 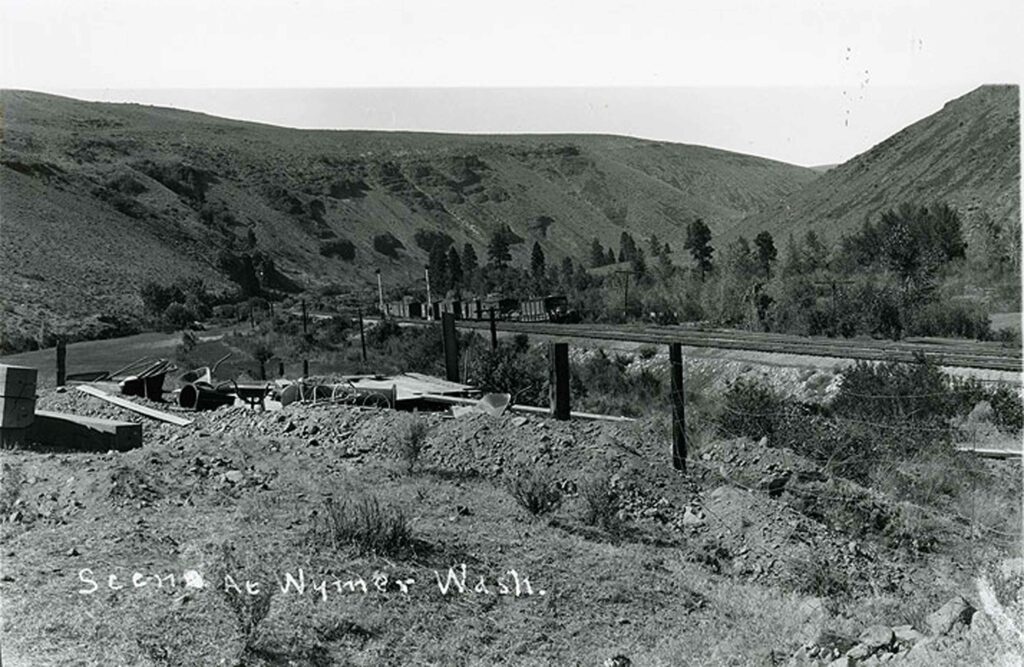 I would like to thank Troyce Brooks for doing the research to find Dorthea Mae and her story and Jane Young for the glass negatives that are shared. Jane is the grand niece of Dorothea Mae. At the request of Jane the glass negatives are now at Yakima Valley Museum