In 1902, the Northern Pacific purchased its last major group of ten wheelers, forty Class S-4 Vauclain compound engines built by Baldwin for the price of $16,787.59 in 1902 dollars.  As built, the Vauclain compound drive cylinders were very efficient, but a maintenance nightmare.  Therefore in 1924 all S-4s were converted to simple drive cylinders. Five years later superheaters were added. Following this they were very successful engines, with most serving more than fifty years until the end of steam.  Crews liked the S-4s because they were well-suited to branch line service, were smooth-riding, powerful, and easy to fire.

Not much is known about the 1364 in its early years.  We recently discovered the 1364 pulling freight in the Yakima area between 1902 and 1905 as seen in this picture. We also know that by its maintenance records that upgrades like electric lamps were done in the South Tacoma shop in 1913.  The same year the 1364, which was stationed in the Tacoma Division, was requested to do service in the Seattle Division.  In 1931 she was running between Arlington and Black River. She was seen in the eye of a camera at Seattle around July of 1932.  In 1942 in the Auburn yard a brakeman for the 1364 twisted his ankle,  At that time the 1364 was hauling 3 cars of mail from Seattle to Auburn.

It served the Yakima Valley in the east side of Washington in 1947.  Ham Alexander, section foreman in Toppenish, remembered the #1364 switching sugar beet cars out of the U & I sugar beet plant siding located near Buena Way outside of Toppenish.  In that year the 1364 derailed in the Yakima yard.  But for the most part she stayed over on the west side. Speculation has it that she came to the Toppenish area to replace another steam engine that needed servicing.  As trains became longer and heavier, more power was needed. Bigger engines replaced the smaller engines on the long mainline runs.  The 10 wheelers were then relegated to short runs and switching.  Of the 40 S-4s, only four remain today.

Unfortunately the old must make place for the new and the 1364 was no exception.  Although diesels came out in the late 1930s,  because of the high investment that railroad companies had in steam engines, they wanted to get every penny's worth before retiring er.. scrapping them.  Sadly because of "new and modern",  engine #1364 was retired on January 1, 1954 after 52 years of dependable service.  She was spared from the cutting  torch and instead donated to the city parks of Tacoma and proudly displayed at Point Defiance.

The Northern Pacific completely refurbished the 1364 including a new paint job.  To the right the 1364 poses and for the last time in front of the Auburn shop before her journey to the park.

With much fanfare the 1364 was given a new home and to be cared for  by the City of Tacoma who was very proud to have received such a gift.  So with a fair amount of fanfare she was dedicated in summer of 1954. 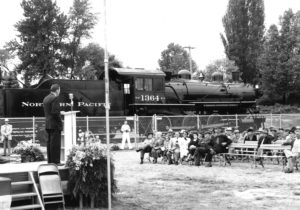 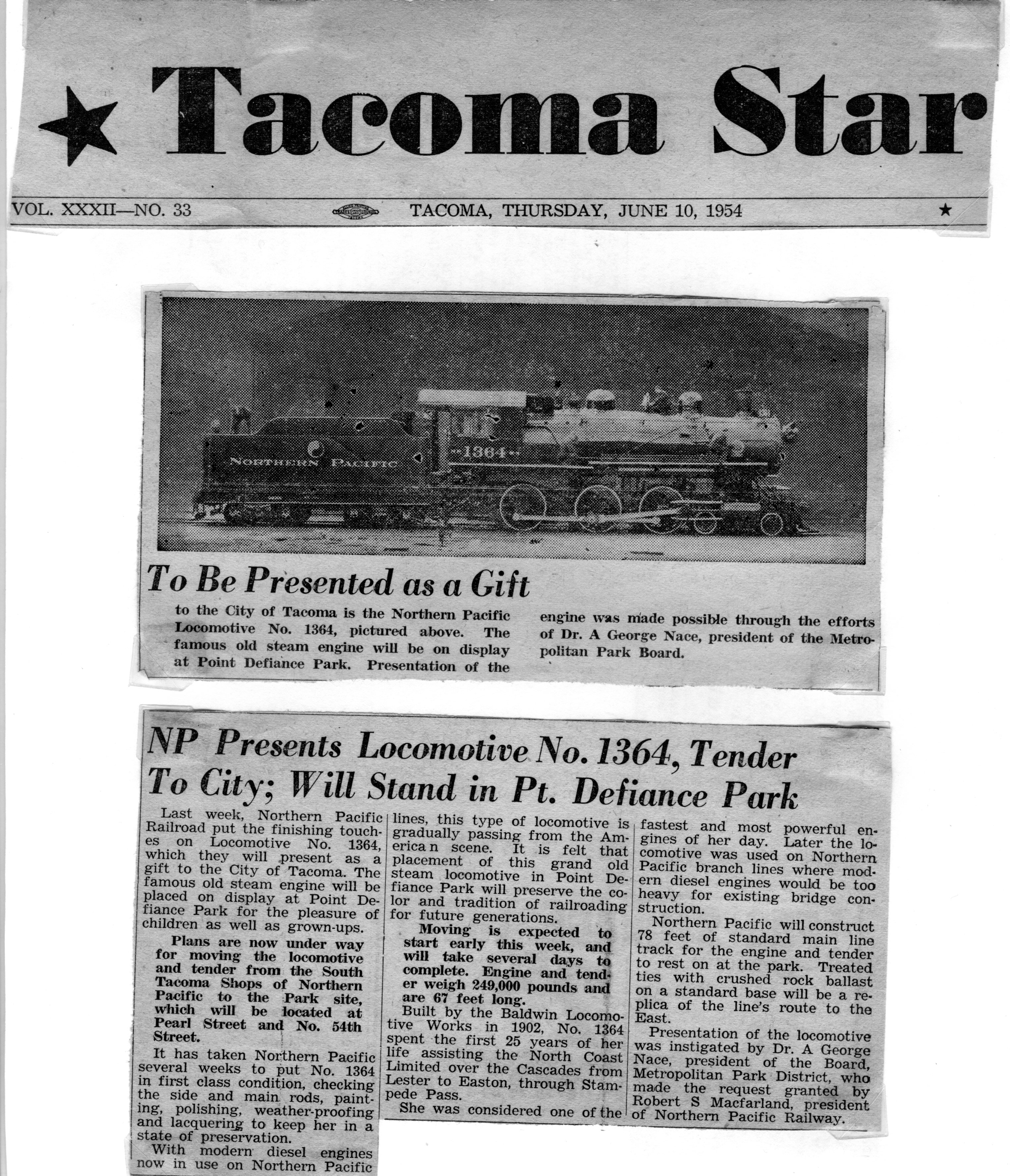 Yours Truly, the webmaster, had the privilege of visiting this steam locomotive as a kid in the late 50s.  Unbeknownst at that single digit age that many years later I would actually be a part of the team rebuilding this engine.  Nor was I the only youth that would want to climb all over the 1364 and, well maybe, help restore it.

Although spared from the cutting torch the engine would suffer a subtle yet destructive force, the elements.  Rust never sleeps, especially in wet weather; wood begins to rot.  Yes, Tacoma was proud of its landmarks even the youth. 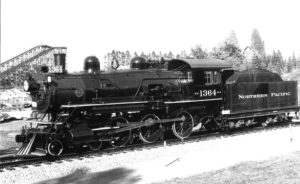 HOME
BACK
TOP^
THE SAGA OF THE 1364 CONTINUES